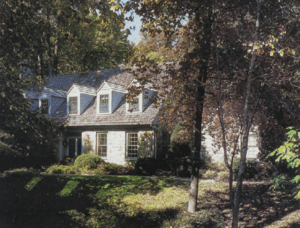 The exterior of this traditional fieldstone and clapboard Cape Cod house gives no clue as to what awaits within.

As Discovery Television’s Lynette Jennings moves through the iris and clematis in this poolside garden, she lifts her arm to make an “L” with her hand directing the crew and talking of wide shots.  “We need color, wherever you can find color.”  She is more than an attractive performer.  Lynette Jennings Design is her show.
It’s late spring, and Ms. Jennings is at the home of Jane and Scott Pelley in Virginia.  Mr. Pelley is a featured journalist for CBS news and Mrs. Pelley is a writer in the health care field.    (Their home was featured in the Winter 1999 issue of HOME & DESIGN Magazine.)  And it’s here Lynette Jennings has chosen to feature the interior designer Jean Bouchoux Higgins, owner of Inside Out Interiors. 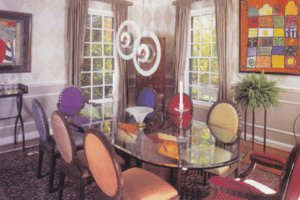 “The objective behind the program is to show Americans how other Americans live in particular regions, within communities… the conglomeration of different lifestyles.  It’s multiple demographics as well.  So, I choose a theme based on how rich in culture and history it is – geography, topography,” Ms. Jennings, explains, revealing a background in urban development.  Behind the swags, chintz and chenille, there is conceptual depth.
As she sits in the comfortable family room of the Pelley home, Ms. Jennings talks of the criteria for her choice of rooms to feature.  “The philosophy: homes have to be camera ready, they have to have a certain amount of design integrity, they have to have ingenuity, and there has to be a story.  So the qualifications the house has to meet are fairly deep.  I won’t shoot a house because there is a billion dollars thrown at it, an expose of the very wealthy.  We get down to our final count and back them up triple deep, because, from the time we start until the time we finally shoot a house, any number of things can happen.”

For designer Jean Higgins, this was an unexpected opportunity.  “Back in early February I was sent a six-page fax from Spring River Productions, Lynette Jenning’s company, inquiring about projects I had done – an entire house, preferably in Virginia.”  At 10:30 one night she faxed them information on two homes.  “They called at 9 a.m. the next morning and expressed interest in both.”  She sent photos of the houses and a copy of HOME & DESIGN Magazine featuring the Pelley home.  Around March 10th, Ms. Higgins received a call that the Pelley home and been chosen.  “They never said how they got my name.” However, a call from Lynette Jennings had been made to HOME & DESIGN Magazine.

Time For The Show 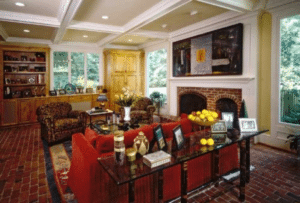 At the Pelleys, there was still work to be done in the renovation: two baths and a closet in the master suite.  The work resulted in a “huge clean-up project – that fine white dust over the whole house,” relates the undaunted Mrs. Pelley in a tone that belies the effort it took to get the house ready.  With the major projects completed, there remained only last minute tasks.

A week before the shoot, Ms. Higgins and Mrs. Pelley divvy up the responsibilities.  On the day before the shoot, they dash to Fresh Fields for flowers and camera-ready delicacies.  Ms. Higgins’ homes have been published before, so she is a pro at styling for photography.  Recognizing the camera’s unrelenting eye, they take a crochet hook to the sofa arm, repairing cat damage.  Mrs. Pelley arranges the flowers, and Ms. Higgins takes a quick trip to Design Elements for camera – favoring accessories to replace a few things that look great in three dimensions but lose something on film.  “It’s wonderful to have a client where you feel like a team, especially if something is going to be published,” says Ms. Higgins.

It is early morning when the trucks pull into the driveway.  As crew members duck around cameras and lights, phones are turned off, and cables snake through open windows and across floors, every inch of the house is invaded.  The lights come on and Ms. Jennings, dressed in cool beige, opens the Pelleys’ front door and invites the nation inside, while, off camera, Mrs. Pelley moves through the day as though nothing unusual is happening.
“I felt very blessed that I had a couple like the Pelleys, because they are very used to having this kind of action,” relates Jean Higgins.  “Others could be easily traumatized.” How true.